The Catholics of Kedron up until 1923 belonged to the parish of Wooloowin. On 27th May 1923 the foundation stone for the Kedron Church was blessed by Archbishop James Duhig. The new Parish catered for the needs of the Catholics from Kedron and as far north as Bald Hills and Petrie. The burden of raising funds for the building of the Church and Presbytery was to be managed by Fr Keating and Fr Stanaway. They received generous support from the people of Wooloowin ~ further fundraising came from dances held at Chermside, Aspley, Bald Hills, Geebung and Zillmere.

When the first Kedron church was opened, it was dedicated to St Thérèse of Lisieux, The Little Flower, and was the first Church in Queensland to be placed under the patronage of this Carmelite nun.

Three months after the opening of the Church, at 3:00pm. Saturday, on Australia Day, 1924 a cyclone blast swept through Kedron to Nundah, and within minutes the little church of Kedron crumpled to a complete wreck. Among those in the Church at the time are recorded the names of Ruby Wren, Charlie Wren and Margaret O’Hagan.

The destruction of the first Catholic Church at Kedron aroused widespread sympathy. As a result funds came from all over Australia for the re-building of the Church. As well the locals worked together to see that the Church when it was opened would be debt free.

Among the names recorded of those who were instrumental in fund-raising were the Hennessys, Maguires, Wrens, Heffernans, Stantons, O’Briens, Scanlans, Eccles and Kennedys. In all something of about four thousand pounds was raised.

On 27 April 1924, Archbishop Duhig came out to re-lay the foundation stone of this the second church on the Turner Road site. The Church that we currently worship in (built in the late 1960’s) includes a stained glass window from the 1924 church ~ it is above the northern side entrance, and is of St Thérèse, The Little Flower.

Archbishop Duhig offered the position of Parish Priest of Kedron to Fr Keating of the Wooloowin parish ~ he declined ~ and went on to be Parish Priest of St Francis Church, West End. The Archbishop subsequently appointed Fr Stanaway as first Pastor of Kedron. He was kindly accommodated at the Wren’s in Cremorne Road.

With the reopening of the Church at Kedron, the parish rapidly developed. The first congregation numbered about 50, but with increasing numbers coming into the area, the number of parishioners began to grow, and additional Masses had to be organized to cope with this reality.

Gradually the furnishings of the new church were purchased, and the interior of the Church was completed. Among those who gifted altars, statues and other furnishings were the Woulfe family, Mr Frank Wren, Mr Tom Flanagan, Mrs Tynan, Mr & Mrs M J Gallagher, Mrs McMullan and Mr Stephen Lacey.

Between 1924 and the demolition of the Church in the 1960’s some alterations were made to the church ~ the extension of the Sacristies, and the arching of the sanctuary to enable the statues of St Joseph and St Thérèse to be installed, with the statues of the Sacred Heart and of Our Lady placed inside the Sanctuary.

The Coming of the Franciscan Friars to Kedron

In 1927 the Irish Franciscans made a concerted effort to expand their mission in Australia ~ and this responsibility was given to Fr Fidelis Griffin ofm, described by the present Archivist of the Province as ‘an extraordinary and complex character. He was strong willed, supremely confident of himself and his own opinion and judgment, fiercely determined, a man of profound yet totally simple faith, amazing vitality and who loved the Order and everything Franciscan’.

After endeavoring to begin a Franciscan presence in Melbourne – where he had to deal with Archbishop Mannix, Fr Fidelis began some negotiating with Archbishop Duhig for a Brisbane foundation. The Archbishop offered the Franciscans Wynnum and Manly, as well as South Brisbane. The place eventually settled on was Kedron ~ then described as ‘a very disadvantaged housing settlement for World War One returned soldiers’.

The Franciscan Friars made Kedron their choice, in part, because the archdiocese owned quite a few acres of land, that the Franciscans could buy, and Fr Fidelis, the Franciscan superior, had in mind using that land to establish a seminary for the training of Australian friars.

One can image the negotiations that went on between these two Irishman ~ Duhig, the Archbishop, and Fidelis, the Franciscan. The Archbishop originally asked 700 pounds an acre for the property, but was eventually happy to accept 250 pounds an acre. And this was settled without any loss of goodwill! 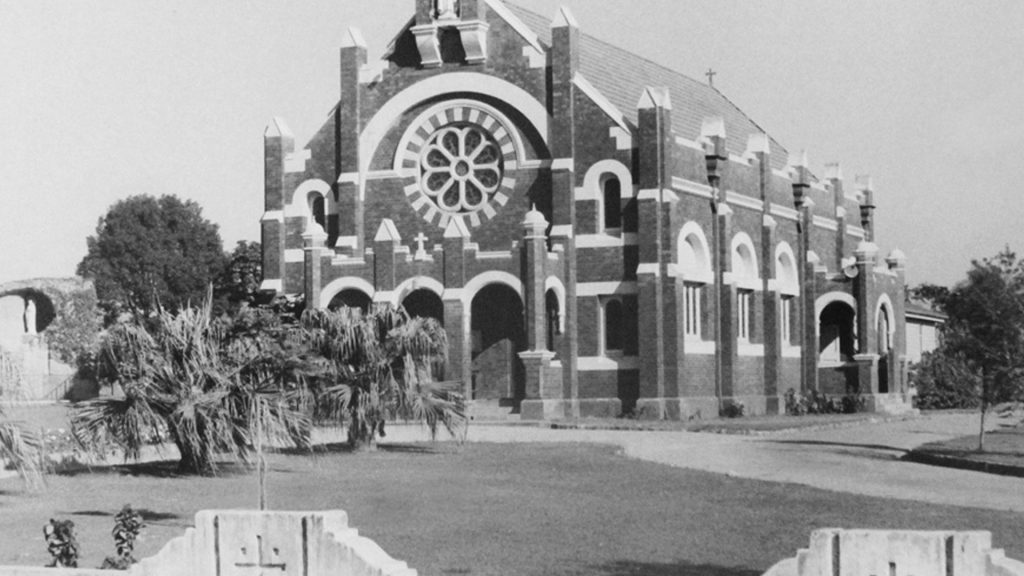 The Franciscan Friars took possession of Kedron parish on the evening of 12th June 1929.

Now the parish was delimited ~ before it had included Gordon Park and Bald Hills. The boundaries of the parish were determined along Stafford Road, which cut off Gordon Park, Webster Road, Rode Road ~ which cut off Bald Hills, along Gympie Road to Tannery Creek, which was followed to Kedron Brook and back to Gympie Road, linking up with Stafford Road. In all there were less than 400 Catholics in the area.

The pioneer friars appointed to Kedron were Fr Fidelis as Parish Priest and Frs Ronan and Celsus as assistants. The diocesan priest Fr Stanaway resigned, and his generous but short service to the parishioners was acknowledged by M J Gallagher, Peter Carter, Charlie Wren and Harry Bevan.

The parish plant at that time consisted of the Church and presbytery ~ in all with a debt of 1800 pounds.

The Archbishop expressed his concern to the friars about the number of Catholic children in state schools ~ 69 were at the Public School in Glen Kedron, and a few were at Stafford State school. So the challenge now was to find suitable land to be purchased, a community of sisters to conduct a school, and a place for such sisters to live.

Having arranged for the Sisters to come to Kedron, the next problem was land for the school. There was vacant land opposite the Church, and it was owned by the City Council. Although the Council demanded a rather inflated price for the land, three acres were bought for nearly £3,000.

The next step was the building of a school. The plan was designed by H G Sydes, and J Schmid was in charge of building works. Mr M J Gallagher, a generous benefactor of the parish and friend of Fr Fidelis, turned the first sod on the building site.

The school, a substantial structure built to take another story, was finished at a cost of £2,000.

Padua College later bought this land and building ~ it now constitutes Padua’s Western Campus where boys in years five to seven are educated. What especially thrilled the parishioners was that the Sisters had arrived, virtually from the ends of the earth, from Italy, the United States, and all of them Irish!

The Archbishop blessed and opened the school on 26th January 1930.

To provide accommodation for the Sisters now teaching in St Anthony’s School, the friars vacated the Presbytery—(the present Parish Hall) – and occupied the small rooms at the top of the stairs of the school. They were catered for by the Sisters, Sr Mary Isidore is reported as being an excellent chef!

It was time to think about a Friary. Hennessy & Hennessy, architects were engaged to prepare plans and specifications for a Spanish Mission style ~ similar in some ways to the Spanish Franciscan mission style of California. What was built was but the small corner of what was to include a towering campanile featuring the chapel at the left-hand corner of the long front façade.

During the Second World War the Friary was a magnet for all the Chaplains in and around Brisbane. Among those who visited it were Indonesians, Dutch & Americans as well as Australian Franciscan chaplains, Pat Reynolds, Leonard Gleeson and Brendan Rogers who were all later to be Pastors of Kedron. The early years of the parish saw established the Holy Name Society, The Secular Franciscan Order, the Sodality of the Children of Mary, the Boy Scouts and the St Vincent de Paul Society.

Part of the original agreement between the Franciscans and Archbishop Duhig was that the friars were to supervise the building of a church at Wavell Heights and to care for it for five years. The church was put under the patronage of the Franciscan St Paschal, and the school under the care of St Mary of the Angels—remembering the place just outside Assisi with the same name, that became the mother church of the Franciscan Order. When the friars finished their five year stint, the Pastor appointed was Dr O’Donoghue, who in his early years lived with the friars at Kedron.

Much of the subsequent history of the Kedron Parish is tied up with the continuing need to offer a catholic education to children of the area. To that end St Anthony’s School was moved to new buildings on the corner of Turner Road and Somerset Street: Mt Alvernia College and Padua College were established in the mid 50’s. By 1954 Kedron was home to 5,364 Catholics and five Masses were celebrated for the people each weekend. At all Masses the church was overcrowded. So a new church was planned to meet the needs of the parishioners especially those on the eastern side of Gympie Road.

The Archdiocese bought land on the corner of Gympie Road and Castle Street for £14,300. Mass was originally celebrated upstairs in the old house on the property: 6am, 7am, 8am and 9am.

To finance a new church on the block, Pizza Hut purchased some of the land for $62,500. Fr Frank O’Brien ofm was keen that the new chapel of ease be designed such as to encourage greater community and social use.

Archbishop Francis Rush blessed and opened the Portiuncula, the chapel of Our Lady of the Angels on 16th September 1973.

With an ever increasing number of parishioners, the Church on Turner Road could not hold the numbers. Fr Brendan Rogers began plans for its demolition and the erection of a new Church, a larger church and one designed to take into account the liturgical norms suggested by the Bishops of the Second Vatican Council.

The present Little Flower Church was built at a cost of about $175,000, with a $118,000 mortgage to be paid off. This present Church seats about 630, quite adequate for funerals and very popular for weddings ~ but the Sunday Mass in the early 70’s was an issue. A count one Sunday on February 1972 revealed 1,881 had attended the five Masses at the Little Flower, and a further 636 attended the four Masses at the temporary Chapel in Gympie Road.

Sadly, due to decreasing numbers attending Eucharist in the 1990’s and fewer Franciscan priests available for ministry at Kedron, the Chapel at Gympie Road, affectionately known as “The Port” closed with a final Mass on 4th October 1998. A welcoming Mass at the Little Flower was then celebrated on the following Sunday 11th October for those who had lost “The Port”. 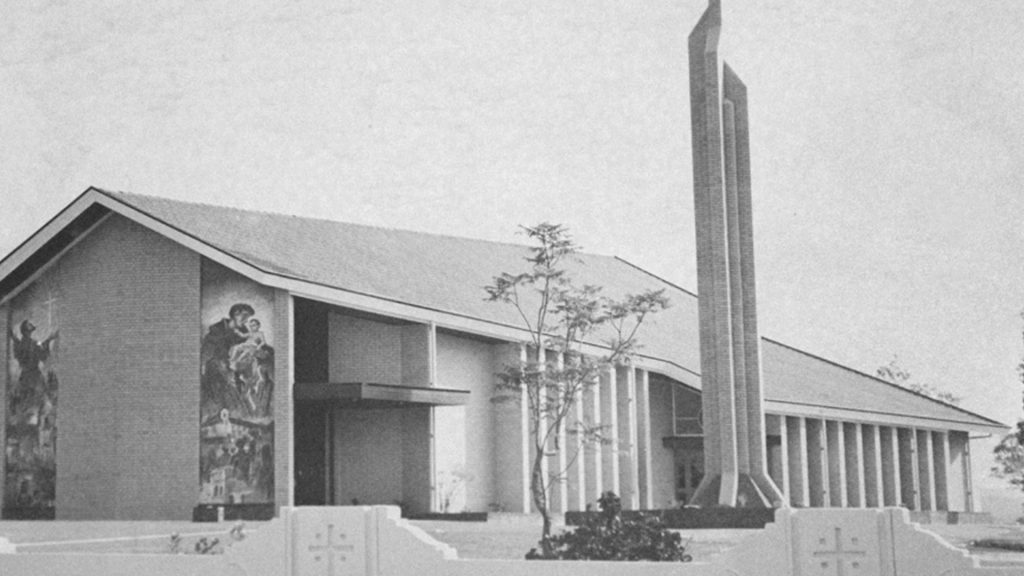 1923 Laying the foundation stone of the Kedron Church, the first Church in Queensland under the patronage of St Therese.

1937 June 13th Foundation Stone laid for the Church of St Paschal Baylon in Rode rd Chermside (now Wavell Heights) – was served by the Friars for some years.

1954 Church of Our Lady of the Angels opened to function as the Gympie Road Chapel of Ease (Old House).

1968 Laying the Foundation Stone for the new Little Flower Church.

1973 September 16th, Our lady of the angels Community chapel (The Portiuncula) blessed and opened by Most rev Francis Robert Rush DD, Archbishop of Brisbane.

1996 Friars move to the new Friary at Adele St, Kedron.